Hodds Salver vs Swaffham Away

We had a great match at Swaffham only just failing to overturn the home team by three holes. They were a good side and the match was played in excellent spirit. So quarter finals in 2019 and hoping for further in 2020. Well done team, very many thanks for all of your support.

We had a very well attended AGM which went well. The senior captain reported on the year's seniors activity and the treasurer reported on our accounts for the year. We agreed unanimously to donate £250 to the Sandra Chapman Centre at the James Paget Hospital, selected by Phil Lowe, one of our seniors, who is receiving treatment there at the moment. We decided to run a Player of the Year in 2020 for anyone who plays ten games or more in the friendlies. We will continue to add events and ideas  so that we get the most from our membership. Alex Knapton will be the Senior Captain in 2020 with Mick Turner as his Vice-captain so all continued support will be much appreciated.

We played the 3 clubs and a putter competition this year over 18 holes. It worked out very well with Barry Needham coming out the winner with 36 points followed in 2nd place by Gary Aldis with 32 points. The captain offered to buy a cup for next year and add on Barry's name once purchased.

Many thanks to everyone who attended and who played. Your support is always appreciated.

One of our seniors, Phil Lowe, sadly died on Sunday after a year long fight against cancer. He was a great addition to the seniors and supported many of our competitions and matches. He will be greatly missed. His funeral will be held at 11.00am on Tuesday the 19th November at the Waveney Memorial Crematorium Beccles and afterwards at Rookery Park GC.

The finals have been played. 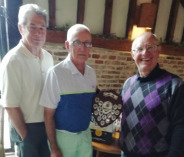 We had a really good day on Friday the 20th September when good weather added to the enjoyment of the day.

There were very good scores, only three pairs failed to reach 40 points.

In the end the pairing of David Newton and David Hansen came out on top with 47 points closely followed by Mick Robertson and Frank Hayes with 46 and Peter Harvey and John Castel a further point behind. Many thanks for all who entered. Fill list of results below.

What a good inaugural MJ Fiddy Cup. Some great scores, and some not so good! Geoff Edwards proved again to be the golfer in form with 38 points. Barry Needham was second with 37 points just beating Paul Harrison on countback. A great many thanks to John Castel who provided the prizes including a very nice golf bag shaped whisky decanter. Many thanks to all who entered.

Many thanks to all who took part in the Senior Captains Day on Friday the 26th July. A hot day but everyone finished. The winner was David Newton with a great 42 points, Mick Turner scored a very creditable 37 points for 2nd place, credit goes to Peter Harvey who came 3rd with 36 points and who walked the 18 holes in so great a heat and Geoff Edwards the early leader ended up in 4th place. Well done guys.

On the day £127 was raised for Prostate Cancer. Well done everyone.

Geoff went out early and came in with 42 points for a great win. Barry Needham came 2nd with 40 points after countback against Dave Hills in 3rd. It was the SSAFA charity event and we raised nearly £200 for the very well deserved charity. Geoff and Barry are selected to represent Caldecott Hall GC at Bawburgh in September in the SSAFA Norfolk golf final. 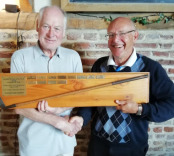 It was a windy day, after a few days of rain, and that was reflected in the scores. Geoff Edwards won with a net 75 followed by Roger Rice on 76 and Ralph Read 3rd with a net 78. Many thanks for all of the entrants. Looking forward to the stableford championship on the 28th June.

We played our 2nd round against Royal Norwich away on Wednesday the 5th June 2019. We lost by 10 holes so not bad considering playing away to a strong team. Many thanks to Graham, Dave, Keith, Kevin, Trevor, Geoff, Paul and John. A shame we didn't win but a good day's golf. Looking forward to 2020 fixtures!

A great many thanks for all who turned up and made the Ian Cumby a great success. So many great scores. In the end Keith Leggett won with a great score of 40 points followed by Allan Schoenherr on 38 points and Graham Banyard 3rd wih 37 points.

It was a very close match but the Seniors just prevailed in the last match to win 11-9.

A very big thanks to all who played - it was good fun and played in great spirit.

Looking forward to the return on October!

The Annual General Meeting was held in the Clubhouse on Friday 26th October 2018 at 9am.
Please see the attached minutes of the AGM for your information. The three clubs and a putter competition that followed the meeting was well supported and resulted in two of the biggest bandits in the senior section scooping the prizes. In second place with 18 points was Peter Harvey and in first place also with 18 points but the winner on count back was Roger Rice. I am not a sour loser but both these bandits had their respective handicaps increased earlier in the same week.

Joking aside well done to you both and just remember you do not need all those clubs!
Seniors AGM 1810 minutes.pdf
Adobe Acrobat document [48.5 KB]

Check back here regularly to find out what's going on at Caldecott Seniors.

Seniors Winter Foursomes Comp was played today at home against Sheringham, a truly spirited game was had by all but unfortunately we lost by 15 holes. The good news is they enjoyed the games /match so much we are being invited to play there in the new year !

They really liked the food,the course and the company so maybe we're not that bad after all.

Well done and thank you.

Yesterday Wed 2 Aug the Barnard Team Fought a hard battle against Kings Lynn Golf Club at Mundesly. Although the rain held off,high winds and an unfamiliar 9 hole course resulted in a 14 hole defeat. As Capt it was a pleasure to take the team through to the Semi Finals,well  done to you all.

From my point of view I am concerned with the way in which these competitions are officiated and unless a less biased attitude is taken I can see less players wanting to play in them.

The Player's medal has now been awarded to 3 players over the last months,it was passed on to Frank Scales for mouthing off at the meal held at Dunston Hall, followed by Alex Knapton for forgetting his trousers at the meal at Gorlston GC and Alex passed it on to John Hickling for being to tight to by a new Seniors shirt.Who's next?

The Stableford Competition held yesterday 30th Jun was won on countback by Howard Johnson with 38 points and Dave Newton close 2nd.An Eagle on the 10th helped and will probably never happen again. The  Norfolk SSAFA rep attended the day and remarked "What a great bunch of guys you have"?????.

The Competition raised £92.00 with the monies raised from the medal comp and further donations to this worthy cause we raised £148.00. Thanks Guys!!

Ther Indoor Golf Simulator is now up and running with various challenges to enter. Water Challenge 140 yards,20 shots to score as many points as you can.Entry £5.00.

Full details in the Pro Shop.

A Thank You Letter 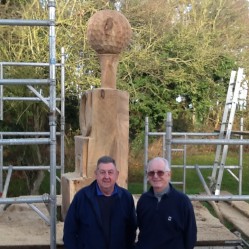 Senior members may like to enter the below competitions or use the below website with information on the Senior Open competitions. Men’s ,Ladies and Mixed

The SGA, we now move into our 19th year with our two tournaments going strong - the Seniors Club Classic, for teams of four, and the National Seniors Pairs Championship.

If you haven’t yet entered, do so now. All you need do is email me with your details and I’ll take care of the rest - no forms to bother with.

But our website is full of information, including over 250 SENIOR OPENS throughout the country. You might want to enter one. Have a look at the revamped website - www.seniorsgolfassociation.co.uk

The SGA is doing more and more with the Royal British Legion too - a wonderful cause to support. Join us in helping those who have served their country.

Spread the word - it helps us all.